Krüger gets The Blues 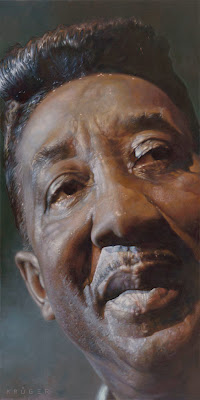 In the past 12 months Sebastian Krüger has completed six paintings of 'Blues Legends', commissioned by one of Sebastian's most important art collectors and supporters - Mark Parker ( President & CEO of NIKE ). Parker has an extensive art collection featuring important works from artists such as Andy Warhol, Robert Crumb, Robert Williams, Rick Griffin, Tom Sacks, Basil Wolverton, Mark Ryden, Von Dutch, Todd Schorr and many more. His collection may be regarded as the largest of its kind.

Earlier Parker had acquired other important key paintings from Sebastian such as "Mick Jagger with Microphone and Saliva String", "Stones 40/40", "Keith - London Calling", Jimi Hendrix and others. The original order of 6 'Blues Legends' commissions have recently been extended to eight, so there are more to follow. "I love Blues music; it's origins and it's influence on music in general." says Parker. Presented here is the first Blues Legend painting 'Muddy Waters'. It's acrylic on canvas, 80 x 160 cm (31 x 63 inches). Every week we will present two additional Blues paintings by Krüger so stay tuned.

Sebastian Krüger
In the early 1980's Krüger studied painting and graphic arts, and then quickly moved into the professional art world where his iconic 'personality portraits' continue to captivate famous collectors and audiences across the continents. Krüger approaches nearly all of his subjects with a level of respect and sincerity contrasting the often extreme exaggeration of their features. The result is the creation of visually and psychologically explosive 'Krugerized' portraits.